In 1964, just a year after the X-Men comics were borne from the legendary minds of Stan Lee and Jack Kirby, the two came together to create a character who would grow to become one of the most powerful (and arguably underappreciated until her screen debut) characters in the Marvel universe. Though introduced as part of a pair, she is singularly stronger than many of those who carried their own series from the beginning – ladies and gentlemen, the character I’m talking about is Wanda Maximoff, a.k.a. Scarlet Witch.

A character of complex powers and abilities, it’s no surprise that Wanda has had so many different iterations of her origins – first introduced as the daughter of Golden Age superhero, Whizzer, a retcon later established an origin more fitting to her unique status. She and her brother, Pietro (Quicksilver), were delivered on Mount Wundagore in Transia, home of the High Evolutionary, by half woman/half cow hybrid Bova, who acted as the twins’ nanny. Their mother, Magda, had fled to Transia when her husband, Magnus (a.k.a. Erik Lehnsherr, a.k.a. Magneto) destroyed an entire village after they fought him and didn’t allow him to save their daughter (older sister to the twins) from a fire. But, not long after the twins’ birth, Magda left them with Bova, never to return, forcing the High Evolutionary to eventually place the twins into the care of Romani gypsies Django and Marya Maximoff, who raised them as their own.

This parentage was canon, until a further retcon in 2015, when it was confirmed that the twins were no longer born mutants, as Magneto was, but in fact were taken from the Maximoffs – their real parents, to be experimented on by the High Evolutionary, who was obsessed with trying to genetically perfect the human race. However, when the experiments failed, the twins were returned to their parents and raised to believe that they were born with the powers they had.
As Wanda grew, her powers became stronger, though her control of them was weak, and as a teenager, her ‘hex bolts’ started a fire that ended up killing her mother; and their father, who had been stealing to feed his family, was beaten to death by a mob of angry villagers. The exploration of Wanda’s backstory at this point (a mere 15 years after her character was created), not only included the origin of her powers, but also the discrimination she faced due to her ‘adoptive’ Romani ethnicity. Fleeing from the camp, as their parents perished, the twins found themselves alone in the world, moving through Europe for the next few years, living off the land. This was until they were recruited to the Brotherhood of Evil Mutants, by Magneto, who saved them from being attacked (all three unaware of the twins’ paternity, as Magneto was still considered their father at this time).

Reluctant villain, with little interest in Magneto’s ideologies, Wanda found herself fighting alongside the Brotherhood against the X-Men, believing that she and her brother owed the people who saved their lives. But, when Magneto was captured by a cosmic entity call the Stranger, the Brotherhood was disbanded, and Wanda declared that their debt had been repaid. It is here that she and her brother requested to join the Avengers, and the twins, along with Captain America and Hawkeye, become the second generation, dubbed “Cap’s Kooky Quartet”. With the vague nature and vast range of Wanda’s powers, she has been able to move seamlessly between many of Marvel’s teams, and though Wanda generally doesn’t connect with other people, she is able to play well on a team. Co-creator Stan Lee was even quoted as saying, “I had big plans for Quicksilver and Scarlet Witch. That’s why I used them in Avengers after I left X-Men”. This is easy to see, when you look at the wide range of events caused, both intentionally and accidentally, by Wanda’s use (and sometimes abuse) of her power.

All of the catastrophes caused by Wanda’s power, can all be traced back to one series of events. During her time with the Avengers, Wanda was trained to use her magic by a sorceress called Agatha Harkness, whilst also being in a relationship with AI, the Vision. When the two married, and Agatha died, Wanda became infused by magic, causing her to become pregnant, giving birth to twin boys, Thomas and William. While assisting the West Coast Avengers, Wasp, who had recently joined the team, questioned the existence of Wanda’s children, which led to them fading in and out of existence until it was revealed that they were in fact parts of a devil’s soul, contained using mystical energies, by none other than Agatha Harkness, who was alive all along.

A grief-stricken Wanda had her memories of the children erased, and moved on, until a drunken revelation from Wasp started to bring her memories back. This is the beginning the Avengers Disassembled arc.

At this point, Wanda is not in her right mind, becoming consumed by the Chaos Magic that she cannot control. This triggered memory takes her back to Agatha to learn the truth, where she promptly murders her former tutor. Wanda, in her anger, then goes on to exact her revenge on the other Avengers, though it is believed that even she is unaware of this destruction, her power creating it at a subconscious level. She goes on to kill several of her teammates, taking many others out of action, and generates a Kree army to attack the remaining members. Doctor Strange is called in to find the source of the power, and during a face-off between he and Wanda, Magneto swoops in and takes his ‘daughter’ to Genosha in order to get her the help she needs.

It is in Genosha where we begin the first of the two most famous arcs Wanda is involved in, that would come to define her character for the following decade – House of M.

Magneto, concerned by daughter’s mental state, calls Xavier in, asking him to help Wanda. He refuses to do so, instead placing her into a coma, so she’s less of a threat. Xavier then calls a meeting of the Avengers and the X-Men to decide whether, based on her actions, Wanda should live or die. Horrified, Pietro rushes to his sister’s side to tell her what’s happening, and taking advantage of her fragile mental state, Pietro convinces her to create a new reality – House of M, where mutants are supreme and humans are second class citizens. Here, Magneto and his children are akin to the royal family, though when some of the mutants manage to restore their lost memories of reality and discover what has been done, they attack. And when it’s revealed that Pietro was behind it all, an enraged Magneto kills him. Wanda, powers stronger than ever, raises her brother from the dead and utters a phrase that changes everything – the three words that turned her into Marvel’s most hated character – ‘No More Mutants’.

This brings us to Decimation – the arc that surrounds the events of ‘M-Day’ as it was dubbed, where 90% of the mutant population lost their powers, a spell so powerful that Doctor Strange himself couldn’t undo it and made fans hate Scarlet Witch for stealing the powers of their favourite characters. Wanda, having no powers and no memory of who she was, created a new life for herself near to Mount Wundagore, where fellow Avenger Hawkeye tracks her to in order to try and undo what’s been done. In her amnesiac state, Wanda meets Wiccan and Speed, who are revealed to be the twin sons she lost, and in an effort to jog her memories, they are transported back to the day when Wanda began her attacks on the Avengers. It seems to be in vain as she remembers nothing, but when an explosion rockets them back to the present, Wanda is the Scarlet Witch once more, and reverses the effects of M-Day, returning the mutants’ powers.

Less sexualised and more powerful than many other Marvel characters, she is the superheroine that young girls deserve to see, but it has taken until 2015 (and two feature films) for her to get her own solo run. In Scarlet Witch, we follow Wanda as she travels around the world fixing the magic that is broken.

The Scarlet Witch, is more powerful than any other character in the Marvel universe, hailed as the ‘Nexus-being’ of Earth-616, the personifying character and focal anchor of the spectrum of 616’s existence – but she is in fact the epitome of what it is to be human.

Destroying everything she touches, in Wanda’s mind she is a plague – there’s no reason she should be a hero, and yet all that happens to her just proves that people can be good, even in a life full of ugliness. And though she seems unstable and volatile with her powers, flipping constantly from protagonist and antagonist, her breakdown is a result of a mental illness, culminated through a lifetime trauma, heartbreak, pain and fear – Magda abandons her, Magneto believes he is the mutant Messiah, Marya is killed in a fire Wanda started and she witnesses Django beaten to death – not to mention the Vision’s memory loss and the loss of her children. So, it makes sense that so much of what Wanda does is to protect her brother, he’s all she has, and she cannot and will not lose anyone else.
And after everything she has done, Wanda still tries to set the world to rights again – after all to be human is to be impulsive sometimes, to make mistakes and be selfish. She has been perceived as a monster, a martyr, an outcast and a victim, and yet she still believes there is good in people.

Wanda Maximoff is the proof that managing mental illness after a rough start makes you powerful, and not only that – it makes you human. 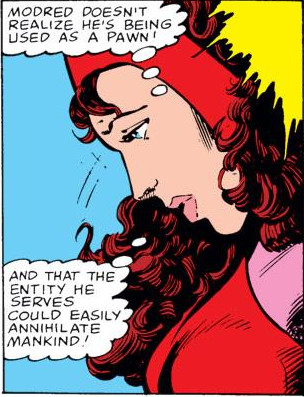 COMICS: A Look into the Future with ‘Telikos Protocol’